Cody is a young, neutered male Pit Bull Terrier. He was found as a stray and taken in to a shelter and then later transferred to a rescue group. His current owner adopted him from the rescue and is enjoying the challenge of incorporating Cody into their family. Cody was seen at East Valley Animal Hospital for his second round of puppy vaccines. Aside from his obvious deformities, he appears normal in every other way and is a very sweet puppy.

Cody presents a unique challenge because he was born with several birth defects. Though he is growing normally and acting like a puppy, his right front limb is severely deformed and he is unable to walk on it. He also has some minor bone abnormalities present in the left front leg though at this time it doesn’t appear to inhibit his mobility. In addition to his thoracic limb defects, Cody was born with a defect of his palate (upper jaw). The palate is closed and he is able to eat and drink normally. The abnormality in his upper jaw causes his incisors to be splayed outward instead of being lined up in a row, if you can imagine the front part of the jaw being flattened a little bit. Right now Cody has all of his adult teeth and the incisors are not touching the canine teeth and likely will not cause long term problems for him, but as he grows if they erupt further to where they are putting pressure on the canine teeth (which are important for normal occlusion and eating), they will be extracted. Cody underwent castration prior to leaving the rescue and handled the anesthesia as well as a normal puppy. 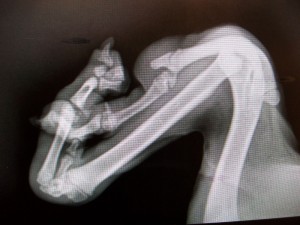 Here are some radiographs (x-rays) of Cody. Take a minute to try to figure out where the bones are going and I will try to walk you through a verbal description.

So on the right side of the picture is the humerus. The shoulder joint is off screen at the lower right hand side. The humerus extends upward. At the point of the elbow, the humerus should articulate with the ulna and radius. In Cody, it appears that the radius is in an appropriate position, but the ulna is smaller than normal and instead of being straight in line with the radius, it is a curved bone that wraps around the point of the elbow.

In Cody’s leg the ulna articulates with one metacarpal which is slightly deformed, and then a 3-phalanx digit is attached to the metacarpal. The radius also articulates with one metacarpal which is then articulating with 2 digits. The radius is also articulating directly with a digit. It does not appear that there are any carpal bones forming a “wrist” or carpus. So Cody has 4 toes: one coming from the ulna, one coming from the radius, and two coming from a single metacarpal at the end of the radius. The result, as you can see from the photos, is an abnormally contracted limb. Where Cody’s carpus or “wrist” should be is the distal most part of the limb, and acts as the point of contact when Cody tries to put the leg down to walk. When Cody is moving at a faster pace he usually picks up right front leg and walks with three legs. 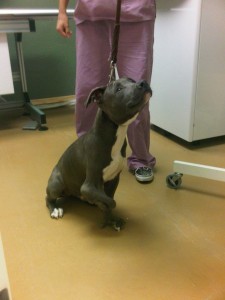 Cody has adapted well to his disability. The biggest concerns for Cody in the future involve the use and function of his left front leg. Dogs bear most of their weight on their front legs. Since Cody has only one functional leg, and it is not entirely normal, we are concerned that he may develop early arthritis or degenerative joint disease due to the wear and tear on his joints. It will be important that he maintain a lean body mass and be physically fit. We want him to be active to keep his joints mobile and flexible. Any excess weight will be difficult for Cody to carry.

The other concern is that Cody will develop sores on the right front leg where he tries to put it on the ground. Amputation would be an option for Cody, but he may need the right front leg in the future to help bear weight if his left front leg develops problems. There are companies that make braces and support systems for dogs with disabilities, so we believe that Cody will have options to help maximize his quality of life if he ever needs it.

Cody is a very sweet boy and we are happy that he has a family that is dedicated to his health and well being. Cody could have been euthanized at the shelter, which would not be uncommon due to the overcrowded nature of most shelters and the inability to provide care for all animals that end up there. But Cody is healthy and doesn’t seem inhibited by his disability. We are glad he got a second chance!